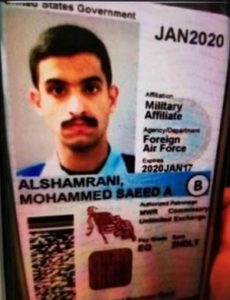 Saudi Arabian second lieutenant Mohammed Saeed Alshamrani shot and killed three persons and wounded eight others at the Pensacola Naval Air Station on December 6 before being killed himself. Alsharamrani was in this country legally as a nonimmigrant alien and was assigned to the Pensacola NAS for flight training. In this country since 2017, he turned out to be virulently anti-American and had posted angry condemnations of his host country to social media before the attack. His case brings up a couple of unanswered questions.

One, Why was he here? Pensacola has as one of its core missions the training of foreign military personnel. In order to have been admitted to the program, Alshamrani would have to have been deemed sufficiently capable for such training and would have been nominated by the military attache in the U.S. embassy in Riyadh.  Dan Cadman of CIS.org speculates that, like most such candidates, Alshamrani would then have been routinely placed on a fast track for a diplomatic A-2 visa, which are intended for lower-level diplomatic personnel. A- visa recipients, he notes, are subjected to a lower level of scrutiny than other foreigners applying for visas.

Question two: How did Alshamrani obtain his gun, since nonimmigrant aliens, which he was, are prohibited by U.S. law from owning firearms? According to Cadman, if Alshamrani was indeed an A-2 visa holder, he would have qualified for firearm possession as “an official representative of a foreign government.”

Thus a faulty vetting process combined with a loophole in federal law combined to cause the deaths of three and injuries to eight others.

Florida Governor Ron DeSantis has pointed out the loophole and asked for it to be redressed. Rep. Mattt Gaetz, who represents Pensacola, has called for tighter screening of applicants to the foreign military training program. And Florida Sen. Rick Scott has called for a review of the entire program itself.  Those changes would be welcome but will come too late for Alshamrani’s victims.

20,000 fake IDs, mostly imported from China, have been seized at Chicago's O'Hare airport this year alone. Phony Chinese-produced driver's licenses, purportedly for various U.S. states, are turning up all over in America. The Chinese underworld, scarcely discernible from the Chinese government, is flooding the West with drugs, illegal aliens, and counterfeits of all descriptions. They must be stopped. www.aicfoundation.com/china-flooding-u-s-with-fake-ids/ ... See MoreSee Less