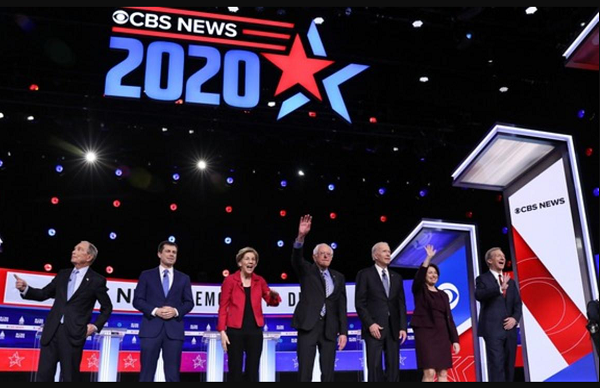 The Democrat presidential contenders got together on stage in Charleston last night for what was billed as the tenth debate of the season over the issues facing our country. As we have been doing for the debates thus far, here is a rundown on what they had to say about immigration.

That’s right. Zilch. Nada. Nothing at all. In what is being called an unmitigated disaster of an event, the Anything-but-Magnificent Seven spent their time yelling, whining, and posturing about why he or she should be given the reins of power. The trailing six, for their part, spent the evening railing against the guy in the lead for recklessly exposing to the world what everyone in the field secretly stands for. It was all b-s and everyone knew it, especially the poor shlumps in the audience who paid–or perhaps had paid for them by the Bloomberg campaign–the exorbitant price of admission: between $1,750 to $3,200, according to reports.

Televised presidential “debates” have never been models of fine rhetoric, of course. They are usually slogs through hours of tedium, each participant hoping to draw an opponent into committing the ultimate gaffe permanently damaging his or her campaign–and hoping to avoid such a gaffe themselves. We’ve long recognized this. Yet, what happens when the whole event becomes one protracted gaffe? When hapless moderators join in on a ludicrous free-for-all of garbled crosstalk and aimless squabble?

That was what was on display last night. Peak disorder boiling down to maximum meh.

The transcript is available, if you are so inclined.