On Wednesday, October 28, President Trump signed a press release announcing his intention to restrict the inflow of refugees into the U.S. next year to 15,000. 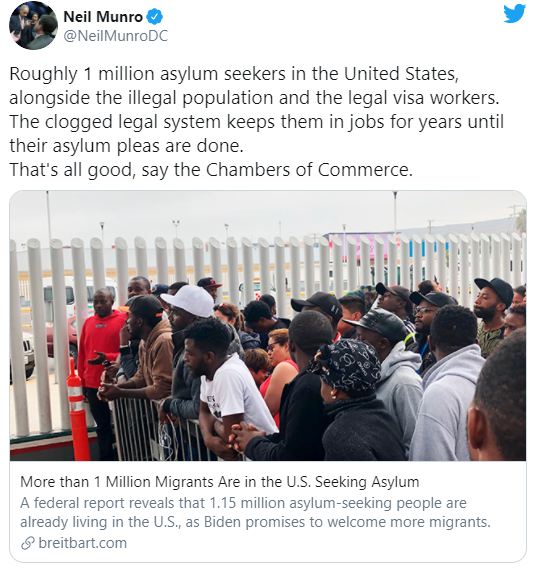 As recently as four years ago, the number was 110,000. Fifteen thousand would be historically low, and the actual number could be even less. In 2019, the overall ceiling was set at 30,000 refugees; in actuality, only 11,814 were admitted.

The importation of refugees is big business in America, a business run by 10 so-called VOLAGs–or “Volunteer Agencies”–in collaboration with the U.S. State Department. Since 1980, those refugee organizations have imported almost four million refugees, costing U.S. taxpayers nearly $30 billion. VOLAGS have been at this for a long time and have racked up huge numbers over the years. One, the Lutheran Immigration and Refugee Service (LIRS) claims to have imported a half million since 1939.

In the words of Breitbart News’ Neil Munro, this deluge of the world’s excess “has been used to impose chaotic diversity on stable communities and provide cheap-labor companies with a flood of cheap labor that helps sideline and impoverish Americans.”

The VOLAGs and their political sponsors crave bigger and bigger numbers, however. Joe Biden has promised to “reassert America’s commitment to asylum-seekers and refugees,” by which he means “open the gates to any and all.” The LIRS issued a statement decrying Trump’s announcement, quoting its head Krish O’Mara Vignaraja: “[T]oday’s decision is a complete abdication of our humanitarian duty and does a great disservice to our national interests.” Singling out Trump’s alleged unfairness to Muslim refugees, the LIRS statement reads:

The record-low admissions figures have also disproportionately impacted certain groups. Admissions of Muslim refugees have declined to approximately 2,500, down from approximately 38,900 in FY 2016. Additionally, the Trump administration set aside 4,000 slots for Iraqi allies who assisted U.S. interests in their home country. However, it fell drastically short, resettling only 161 individuals in this category, or just 4% of the admissions goal.

“Cry me a river,” responds Ann Corcoran, of U.S. Refugee Resettlement Watch, which monitors the VOLAGs. She writes:

The US is no longer the world leader in admitting questionable refugees for American taxpayers to care for! When Trump is reelected, one of his top priorities must be to cement [the] concept of keeping refugees close to their homes until whatever conflict or environmental crisis has occurred is rectified.

Keeping refugees close to home–and not in American towns and cities–until their own countries stabilize is the stated policy of the Trump administration. It is a sane policy, one that honors and protects Americans and eschews the sanctimonious blathering of VOLAGs and their political henchmen. We need to keep it in place.