President Trump let loose earlier today in a series of tweets presumably directed at Alexandria Ocasio-Cortez  (D-NY), and possibly others, such as Ilhan Omar (D-MN), Ayanna Pressley (D-MA), and Rashida Tlaib (D-MI). This group of freshman female representatives is known informally as “the squad.” Ocasio-Cortez in particular has recently been carrying on something of a feud with Nancy Pelosi (D-CA), the Speaker of the House of Representatives. Trump had earlier weighed in on that debate, on Pelosi’s behalf. Here is what he posted today: 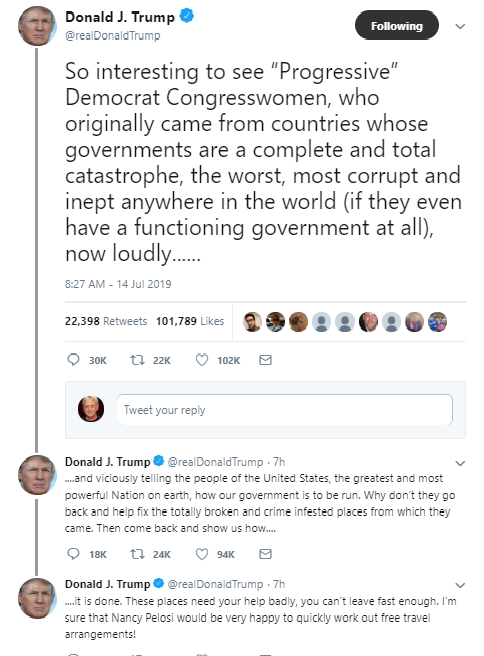 Each of these women has recently been forthright in her denunciation of America.

Alexandria Ocasio-Cortez:  (Comparing America to garbage) “And so I think all of these things sound radical compared to where we are, but where we are is not a good thing and this idea of like 10 percent better from garbage, is — shouldn’t be what we settle for.”

Ilhan Omar: (On the shock of coming to America from Kenya at the age of 12)  “It was the first time that all of the identities I carried and had pride in, became a source of tension. When you’re a kid and you’re raised in an all-black, all- Muslim environment, nobody really talks to you about your identity. You just are. There is freedom in knowing that you are accepted as your full self. So the notion that there is a conflict with your identity in society was hard at the age of 12.”

Ayanna Pressley: “The impact of the prejudices, biases & contradictions codified by our founding fathers is still felt today. We continue to struggle as a nation to embrace our full history, one that includes family separation of black families at the auction block & today of migrants at camps.”

Rashida Tlaib: “This July 4th, please donate to local community bond funds, which help reunite migrant families by freeing caged migrant parents held on bond.  This is how we fight back and demand a more compassionate loving country.”

These women are not representatives. They are full-time political activists, paid well by American taxpayers, and representing only their own far-left agenda.  President Trump is right to call them out.