An official of one of the top cheap labor lobbies, the U.S. Chamber of Commerce, spoke to the local Chamber in Salt Lake City this week, advancing the usual party line of skilled-worker shortages, the need for “immigration reform” (i.e., more immigrants), and the like.

Jeff Lungren, the chief health care and immigration lobbyist for the Chamber,  sounded a bit of a warning in his presentation: it turns out there may be a growing “immigration gap” between the United States and our northern neighbor Canada. 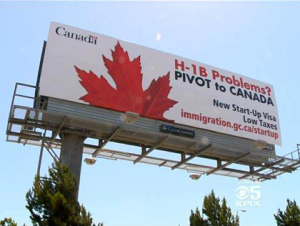 Noting that Canada has launched a marketing campaign to entice foreign workers away from the United States, Lungren said, “There are some industries that if they have trouble with our immigration system, you’ll see them go to Canada.” He explained that the Canadian government has set up billboards along California Highway 101, luring H-1B-challenged companies to “pivot to Canada.”

So what’s up with this push by the Dominion?

The billboards do exist. (See left.) They point to a Canadian government website that explains in detail, to both worker-starved employers and would-be immigrant workers, how to make it all happen.

On the worker section of that website,  wanna-be Canadians are guided through a tangle of programs, classifications, rules, forms, and procedures toward a new life in Canada.

Among the programs listed, one that catches the eye is the  “Atlantic Immigration Pilot,” whose mission is to attract foreign workers to “Atlantic Canada”:  New Brunswick, Newfoundland and the provinces of Labrador, Nova Scotia, Prince Edward Island.

This program was originally slated for three years when founded in 2017 and has now just been extended to 2021. In their March, 2019, statement, they proudly announced, “There are already over 2,535 approved permanent residents destined for or already in the Atlantic Canada.”

While the site is jam-packed with helpful hints such as “How to get a work permit processed within two weeks,” there are a number of steps for a foreigner wishing to immigrate. Step 5, for example, is “Get a settlement plan.” One does this, it turns out, by hooking up with a “settlement service provider.”  Twenty-two such providers are listed, and at the top of the alphabetic list is the “African Diaspora Association of the Maritimes” (ADAM, get it?) .

Finding the African Diaspora in the Maritimes would seem a bit incongruous, but it’s a diaspora after all.  And that means they’re scattered all over the place.  Over at ADAM’s own website, we find that the group has just now welcomed 35 “refugees” to Halifax, Nova Scotia.

We’re not sure how “refugees” fit in with the allegedly skilled workers that they’re supposed to be recruiting. In fact, the focus of the group seems to be more along the lines of refugee recruitment, than skilled-worker recruitment.

For example, a headline from last year on the CBC News website proclaims “Group wants Canada to bring in 20,000 African refugees.” Yes, that group is ADAM. The article quotes ADAM chairman Godfred Chongatera, an immigration lawyer, complaining that African refugees are not getting their fair share of attention by the Canadian government, at least not to the extent that the Syrians got last year.

It’s not clear whether the hoped-for new African-Canadians will all be settled in the Maritimes or sprinkled throughout Canada.  But given the apparently confused mission of organizations like ADAM (recruiting third-world talent versus recruiting the third world itself), it makes us wonder if maybe the one isn’t just an excuse for the other.