We discussed on September 17 the nutty book One Billion Americans: The Case for Thinking Bigger by hard-leftist Mathew Yglesias. Now Uber-weird, never-Trumper Glenn Beck, a pundit masquerading as a conservative but with a penchant for fanciful and dangerous ideas, has outdone himself by agreeing with this Bidenesque tripling of the U.S. population. 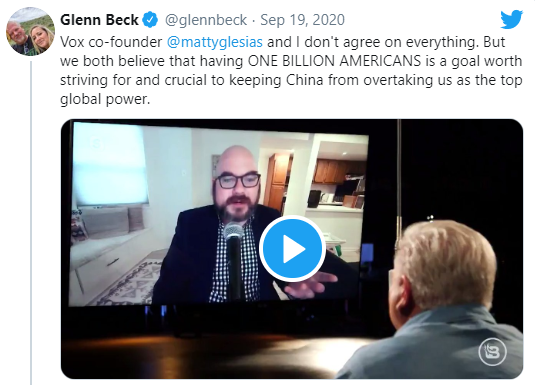 “Having ONE BILLION AMERICANS is a goal worth striving for,” Beck tweeted after discussing the book with Yglesias.

Matt Yglesias, an editor at liberal Vox.com, told Beck, “We are facing a sort of relative decline vis-à-vis China. It’s good to see other people doing well. But when you have a country of 1.2 billion people, it’s four times our population. If they get to half of our per capita wealth, they become a much stronger economy than we are in the aggregate.  And so we should do something about that.”

What we should do, according to Yglesias, is to beat China at its own game by ballooning to a population of one billion. And the way to do that is to open our borders to the world.

Beck agreed, and expressed his belief that the newcomers would certainly work harder than Americans and in fact become “the best Americans.” He did stipulate that somehow we must hold onto our culture in the midst of this overwhelming swamping of our population.

This bizarre and self-sacrificial suggestion was met with scorn and disbelief among the immigration-restrictionist community. Roger Ross said in his own tweet:

They want a BILLION Americans so they can depress wages like they did in China. Not only that, they want degradation of the environment, the depreciation of natural resources, & declines in individual’s quality of life, all for the sake of GDP. Only oligarchs want that.

[T]he most ludicrous manifestation of a pretty widespread view of immigration as a tool for America’s elite to compete with the rest of the world. What he is proposing is a nation-breaking policy. It is almost comical to hear from the left-wing editor of Vox that we need to be engaging in a geopolitical population race with China. … It is as if [Sen.] John McCain got reincarnated.”

As for the faux-conservative Beck, who never met a weird idea he didn’t like, Yglesias welcomed Beck’s stance: “I wish that all conservatives thought the way you’re thinking about immigration.”

We bet he does.