U.S. Citizenship and Immigration Services acting director Ken Cuccinelli is under fire today for suggesting that the Emma Lazarus poem, cast on a plaque bolted to the pedestal of the Statue of Liberty, may not be good policy for the United States. What kind of country seeks to add the world’s “wretched refuse” to its population? 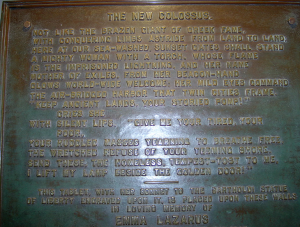 The poem, a sonnet entitled “The New Colossus,” is famous primarily for some lines in its second stanza:

“Keep, ancient lands, your storied pomp!” cries she
With silent lips. “Give me your tired, your poor,
Your huddled masses yearning to breathe free,
The wretched refuse of your teeming shore.
Send these, the homeless, tempest-tost to me,
I lift my lamp beside the golden door!”

In addition to being a mediocre poet, Emma Lazarus was a wealthy New York socialite and socialist. She wrote the poem in 1883 at the behest of a group raising funds to construct a pedestal for the statue, which was yet to be constructed in France. The poem was first read at the opening of an exposition in December of that year and was then basically forgotten for many years, including the years that saw the ultimate arrival and re-assembly of the statue in 1885-1886. It was completely ignored when the statue was dedicated in 1886.

It wasn’t until after the turn of the century when the idea was floated to bolt a plaque bearing the poem to the pedestal.  That period was the heart of the “Progressive” era, and the act of marrying the poem to the statue was a Progressive-era co-opting of the original intent of France, which was to memorialize American independence.  No longer would the statue represent liberty. Thereafter, it would stand for a suicidal, open-borders ideology. As originally conceived, the statue did not relate to immigration at all.

A nation’s icons are an important part of its identity.  Two of our most valued icons are the Declaration of Independence and the Constitution. To elevate a tawdry “occasional” poem to their same level is rash and irresponsible. It is also dangerous, when it contains the foolish twaddle of a socialite amusing herself with socialist utopianism.

This issue has arisen before and it probably will again. Previously,  White House immigration adviser Stephen Miller explained the poem’s significance–or lack thereof–during a press conference in 2017.

Senator Mike Lee, nominally a Republican representing Utah but most clearly a partisan of Indian offshoring interests, has been trying to pass Senate bill S.386 for a couple of years now. The bill would put up to 600K Indians on the path to citizenship. He now seems on the verge of realizing that special dream, and word is he's got all the Republican Senators backing him up. www.aicfoundation.com/will-mike-lee-finally-pass-s-386/ ... See MoreSee Less

This horrific loss hasn't had enough attention. The Niles, IL PD lost 3 officers when an illegal alien ex-DACA w/multiple priors crashed into them while driving drunk in Texas. In all 4 were killed, 3 injured, vets & cops doing a bike ride for the blue. https://t.co/WgLnqct2DT

This is one of the biggest scandals in American political history (competing w/the discovery of Soviet-linked Reds in gov't by McCarthy), and yet U.S. media yawns, and even conservatives are stunningly polite about describing it.
https://t.co/RDEYXnjsBO