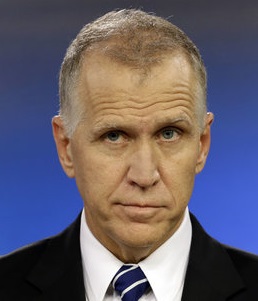 North Carolina Senator Thom Tillis, a nominal Republican, is talking out of both sides of his mouth, as usual.

Up for re-election next year and challenged from within his own party, Tillis is attempting to be all things to all people, and hoping none of those people will catch on.

Currently, Tillis is supporting fellow Republican Mike Lee’s S.386 bill, which would remove the cap on the number of Indian workers eligible for H-1B visas and open the floodgates to large numbers anxious to undercut U.S. graduates in applying for high-tech American jobs.

Existing law caps the number of green cards issued to Indians at about 10,000. The S.386 bill would allow up to 50,000 to acquire green cards and thus a pathway to citizenship.

Tillis’s home state of North Carolina already has a large number of foreign workers from the Indian subcontinent. In 2017, companies in N.C. asked the federal government for visas to import another 10,000 H-1B workers to 30,000 H-1Bs already in place. The outsourcing goes both ways, of course. As Indian workers are brought in, American jobs are sent to India.

All this seems just fine to Senator Tillis, who frequently complains–on behalf of his corporate donors–about the “shortage” of skilled labor and the need for foreign workers.

Yet there is that pesky election coming up, so Tillis had his press secretary tell Breitbart last month:

Right. Every now and then (if you’re a senator, it’s every six years), you have to pay some attention to the yokels who do the voting, even if it means momentarily stepping back from the people you really work for: the corporate donors.