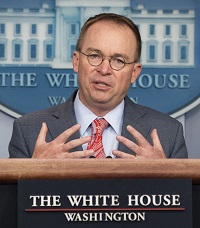 Any one of those guesses or any guesses of any Democrat would be good, and would be wrong.

The speaker was White House Chief of Staff Mick Mulvaney, speaking behind closed doors to a private gathering in the United Kingdom. He followed up the quote above by saying, “We are running out of people to fuel the economic growth that we’ve had in our nation over the last four years.”

Yes, a high-ranking official in the Trump administration uttered those remarks, as reported by John Binder of Breitbart News from a Washington Post article. When asked about the statement, White House spokesperson Stephanie Grisham said, “It’s always been our position that we are for legal immigration.”

That might not be exactly true. President Trump campaigned in 2016 with a slightly different message, declaring in an August 31 address that he wanted to “keep immigration levels within historical norms,” hearkening back to the national-origin immigration quota system of a century ago. As recently as last November, Trump was attributing recent wage gains among the lowest wage-earners to a tight labor market, adding:

Yet the Democrats in Washington want to erase these gains through an extreme policy of open borders, flooding the labor market and driving down incomes for the poorest Americans.

The idea that immigration drives down wages has been confirmed many times by economists, as Binder points out. George Borjas and analyst Steven Camarota, for example, have found that the more than 1.2 million legal immigrants admitted to this country each year “burdens U.S. taxpayers and America’s working and middle class while redistributing about $500 billion in wealth every year to major employers and newly arrived immigrants.”

In addition, Borjas has written, “A 10 percent increase in the number of workers with a particular set of skills probably lowers the wage of that group by at least 3 percent.”

Time and again, experts have concluded that we are not “running out of people” in this country, as Mulvaney would have it, we are only running out of employers willing to pay a livable wage. Trump acknowledged this in his November speech, telling employers that paying more for labor “may mean you make a couple of bucks less in your companies. And you know what? That’s okay.”

As detailed many times in this blog, President Trump has pursued the problem of illegal immigration into this country with notable success, but immigration is a two-fold problem. Until the open-borders cheap-labor lobby is held in check and legal immigration is brought under control, the problem will remain and will intensify. Big business shills like Mulvaney, masquerading as Trumpists, need to be sent to the unemployment lines.