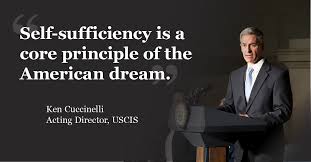 So reads the Immigration and Nationality Act of 1952, which restates a long-standing principle of U.S. immigration policy: any foreigner likely to land on the public dole is not eligible to permanently immigrate into this country. It is a wise policy that should be obvious to any country anywhere.

Yet, like so much of the wisdom that had guided America’s policies over the centuries, it has been lost in modern times, as self-sacrificial ideologies have insinuated themselves into our government.

Last year, the Trump administration vowed to restore this bit of sanity by implementing the “public charge” rule, restricting the granting of green cards to foreigners deemed likely to need welfare assistance. The rule was published in August, but was immediately challenged in the courts. It was then upheld by the Supreme Court in January and again on Friday, finally allowing it to be put into effect.

The rule defines “public charge” as an alien who has received Supplemental Security Income (SSI), Temporary Assistance for Needy Families (TANF), and most forms of Medicaid and food stamps. It will apply to aliens on temporary or nonimmigrant visas seeking permanent status. The Department of Homeland Security estimates that about 382,000 such cases will be reviewed each year. Acting Deputy Homeland Security Secretary Ken Cuccinelli, speaking to Fox News about the policy, said in his talks with Americans, he found that most have been incredulous that such a rule was not already being enforced:

“The reaction by most ordinary Americans that talk to me about this is ‘I can’t believe we needed to do this, I can’t believe that welfare is available for people who aren’t American citizens or who aren’t already here on a permanent basis.’”

The public charge rule is one small win for sanity.