We reported just yesterday on the awarding by the Department of Homeland Security of 35,000 additional H-2B visas this year to seasonal foreign workers in non-agricultural jobs. That increase over the 66,000 visas regularly allotted by the program would result, in the words of Tucker Carlson of Fox News, in a “total of 100,000 workers coming to this country to take jobs during the single biggest unemployment crisis in a century.”

Carlson said such a move would be “demented.”

Apparently, that opinion is shared by someone in the Administration. Yesterday, the DHS, whose head, you will recall, is former cheap-labor lobbyist Chad Wolf, tweeted the following: 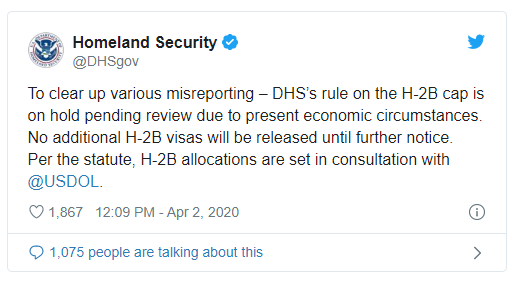 So, to correct the “misreporting,” the DHS is announcing that the release of the 20,000 additional visas that had been scheduled for April 1–with a further 15,000 in May–is “on hold pending review.” (Note that Congress, which ultimately controls the program, had previously given the Department authority to raise the cap by a whopping 64,000! Unbelievably, by adding only 35,000, it seems Wolf had actually been showing some restraint!)

Stepping back from this “demented” act in the face of record unemployment is a wise move, of course, but advocates for immigration sanity say it’s not sufficient, given the crisis. A representative of Federation for American Immigration Reform (FAIR) said, “This is a step in the right direction and should be applauded. However, 10 million have lost their jobs in the past few weeks and it will get worse. American workers need more — a complete moratorium on guest worker admissions.” (Emphasis added)