On Friday, the Trump administration announced a new policy requiring would-be immigrants requesting a U.S. visa to prove they have provisions for healthcare. 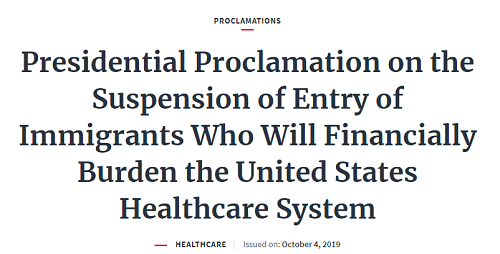 They may fulfill the requirement by either demonstrating access to health insurance or by showing they have sufficient financial resources of their own.

Scheduled to take effect November 3, the policy will not apply to persons already in the U.S., lawful permanent residents, or to asylum seekers, refugees or children. However, it would apply to the spouses and parents of U.S. citizens.

The White House proclamation, entitled “Presidential Proclamation on the Suspension of Entry of Immigrants Who Will Financially Burden the United States Healthcare System,” explains the reasons for the change in its opening paragraph:

Healthcare providers and taxpayers bear substantial costs in paying for medical expenses incurred by people who lack health insurance or the ability to pay for their healthcare. Hospitals and other providers often administer care to the uninsured without any hope of receiving reimbursement from them. The costs associated with this care are passed on to the American people in the form of higher taxes, higher premiums, and higher fees for medical services. In total, uncompensated care costs — the overall measure of unreimbursed services that hospitals give their patients — have exceeded $35 billion in each of the last 10 years. These costs amount to approximately $7 million on average for each hospital in the United States, and can drive hospitals into insolvency. Beyond uncompensated care costs, the uninsured strain Federal and State government budgets through their reliance on publicly funded programs, which ultimately are financed by taxpayers.

The new policy is in keeping with a similar announcement made in August regarding the so-called “public charge” rule. That rule, set to go into effect October 15, strengthens the ability of U.S. officials to deny green cards to immigrants thought likely to rely upon public assistance.

Needless to say, the left is furious over such policies, which stand in direct opposition to the positions favoring “Medicare for all” that seem to be favored by most Democrat presidential candidates.