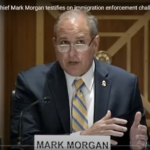 U.S. Customs and Border Protection (CBP) Commissioner Mark Morgan testified before the Senate Committee on Homeland Security and Government Affairs yesterday; you can watch his testimony here. Morgan spoke of the work the CBP has done to prevent the introduction of the Wuhan virus into the U.S. through illegal migration.

Commissioner Morgan told the Committee that the Center for Disease Control’s Title 42 law, which provides for fast track deportations for the purposes of public health, has made it possible for his agency to instantly deport 95 percent of illegal border crossers since its implementation on March 20.

Morgan said the law, which is used in combination with other measures such as asylum and reforms, diplomatic agreements, and the growing border wall, has made it possible for the CBP to reduce the number of foreign nationals in its custody to about 150-200 on any given day. At the peak of the immigration crisis of last year, that number was around 20,000. Morgan said that “introducing a single COVID migrant into these conditions would have been catastrophic.”

In addition, the total number of unaccompanied minors — who can be freed into the U.S. — crossing illegally has been reduced by about 70 percent.

The Trump Administration has successfully implemented numerous changes in its policies regarding both legal and illegal immigration, in spite of almost universal opposition from the left, from federal judges, and from big business. Most recently, President Trump defied the Silicon Valley cheap labor lobby by pausing H-1B and other guest worker programs for the rest of 2020.

Overall, the work has been difficult, but the progress is real.