Migration advocates have a stable of myths they commonly repeat, and because their numerous friends in the media repeat them too, the general public tends to believe these false claims. AIC Foundation posts a weekly “fact checker” to refute these and other media-induced myths.

Myth 1: Immigration Can Save Social Security and Medicare
Immigration advocates claim that immigration will significantly lower our average age, thereby providing an adequate number of young workers to support those retirement programs.
It is true that the present level and character of immigration will raise the percentage of working-age people (16 to 65) over time, but the increase will be negligible—far too small to make meaningful contributions to Social Security and Medicare. To illustrate, in 2010, 66.6 percent of our population was working-age. By 2050, that total, without any immigration, would drop to 59.2 percent. With current high immigration levels, it would only rise to 60.3 percent.

The percentage would be higher if we had an immigration policy that specifically selected for young immigrants, but such a goal would conflict with existing priorities for immigrants, including family ties and diversity. Given the constituencies for these categories, it seems unlikely that an overall age preference could be enacted.

Current immigration policy will not make us much younger, but it will make us a lot more numerous—to the extent of 80 million more people in the next 33 years. This rapid surge of population will place considerable stress on our finances, infrastructure, and environment. The attendant growth in diversity will strain national unity. Social Security won’t gain from it, but social insecurity just might. Source: Steven Camarota, 2012 “Projecting Immigration’s Impact on the Size and Age of the 21st Century Population,” Center for Immigration Studies.

Myth 2: We Need Immigrants Because of a Worker Shortage
If we truly had a shortage of workers, some key statistics would reflect it, but they don’t. One example is wage levels. Since 1970—when mass immigration began to take off—U.S. wage levels in constant dollars have stagnated, even as our productivity has increased. Also, if we truly had a labor shortage, the percentage of the working-age people in the workforce (18 to 65) would be increasing. In terms of numbers, there were 48.1 million working age-natives not working in 2015.

A further point to consider with respect to the labor shortage claim is that we are now entering an age of greatly increasing automation. According to a study done at Oxford University, almost half the jobs now being done by people in the U.S. will be automated within the next twenty years. In this situation, claims of a labor shortage will be even harder to sell than now. Sources: “A Decade of Flat Wages: The Key Barrier to Shared Prosperity and a Rising Middle Class,” 2013 Economic Policy Institute; Public use file of the Current Population from the second quarter of 2000 and 2015; MIT Technology Review, Report Suggests Nearly Half of U.S. Jobs Are Vulnerable to Computerization, Aviva Rutkin, 9/12/13.

Myth 3: Immigrants Are Superior at Starting Businesses
Commonly we hear that we need not worry about immigrants taking U.S. jobs because they excel at creating businesses which create new jobs for everyone. The basis of this myth is that some national groups of immigrants are more likely than natives to create businesses. But it ignores the reality that other groups are less likely to be entrepreneurs. Overall there is very little difference in the percentage of natives who are self-employed (11.1) and immigrants (11.4).

This slight edge in favor of immigrants, however, is mitigated in favor of natives by several factors. One is that natives have a higher rate of part-time self-employment, 1.7 percent, compared with 1 percent for immigrants. Another is that a higher percentage of native-owned businesses (19 percent) employ more than ten workers, compared with 16 percent for immigrant-owned firms. Also, immigrant-owned businesses tend to hire other immigrants, usually of their national background, rather than natives.

Immigrants do reasonably well in business, achieving at a level comparable to that of natives. But they are not the entrepreneurial supermen portrayed by immigration advocates. Source: Public use file of the 2015 Annual Social and Economic Supplement of the Current Population Survey. Figures are for employed persons 25 and older.

Myth 4: Immigrants Aren’t Allowed to Get Welfare
There are restrictions on immigrants getting welfare, but numerous loopholes keep them from having much effect. Immigrants aren’t supposed to become “public charges,” but this only applies to cash benefits, and this restriction is seldom if ever enforced. Immigrant-headed households use significantly more welfare (51 percent) than native-headed households (30 percent). Interestingly, immigrants have a slightly higher participation rate in the workforce than natives. The problem is that many working immigrants work at low-wage jobs, and their low salaries qualify them for welfare. Continuing mass immigration helps to keep those wages low. 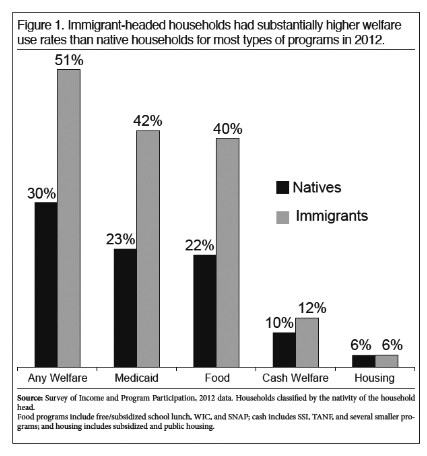 Myth 5: Immigrants Are Natural Conservatives
This is a statement commonly made by some conservatives who believe that immigrants have a love for freedom, family values, and other characteristics that will incline them to support conservatism. Yet data show that Hispanics and Asians, groups with the largest numbers of immigrants and first generation citizens, strongly incline to liberal positions—particularly on government and economics. As a consequence, they favor Democrats by a margin of 2 to 1.

Among the reasons for the leftist economic bent among immigrants is that many are from countries with that outlook. Also, many of them settle in liberal urban areas of the U.S., and that political climate tends to influence them. They also may embrace liberalism out of self-interest for welfare benefits and affirmative action.

On social issues there is no clear liberal or conservative disposition among immigrants. They are liberal on some issues and conservative on others. Many conservatives cite stronger anti-abortion sentiments among Hispanic immigrants than natives. That is true, but second generation Hispanics hold views on abortion comparable to those of native-born Americans. In any case, social issues are not a high priority for immigrants. Top issues for Hispanics are education, jobs, health care, and immigration. Immigrants are not natural conservatives. They much more naturally incline to liberalism, as their preference for the Democratic Party clearly shows. Source: Pew Research Center

President Trump has announced he will limit refugee admissions next year to 15,000. That's down from the 2016 high of 110,000. Progress! www.aicfoundation.com/trump-lowers-2021-refugee-ceiling-to-15k/ ... See MoreSee Less

Driving through downtown LA...so many businesses boarded up & in the process of boarding up. Same thing happening in Beverly Hills & Santa Monica in anticipation of election night. All 3 areas hit hard by looters & rioters during George Floyd unrest. 4

Our hearts and prayers go out to the loved ones of the victims, and to all the French people in their struggle against an oppressive multiculturalist government determined to destroy French culture, nationhood, and identity through mass immigration.