We asked the question in the title on July 13.  Now we know the answer.

President Jimmy Morales of Guatemala today told President Trump he cannot go along with what had been announced as a virtual fait accompli: that Guatemala would consent to the “safe third country” designation, thus providing an alternative to the U.S. for migrants seeking asylum.  As we reported in that earlier post, “Under its provisions, the U.S. could send any asylum seeker straight to Guatemala, regardless of whether that would-be asylee has ever set foot there.”

That will apparently not be the case, as Morales has now declared that his country’s high court has blocked the plan.  Furthermore, a spokesman for Morales denied there was ever a deal.  “Guatemala never talked about signing a safe third country agreement,” he insisted.

Trump, not at all pleased, tweeted the following: 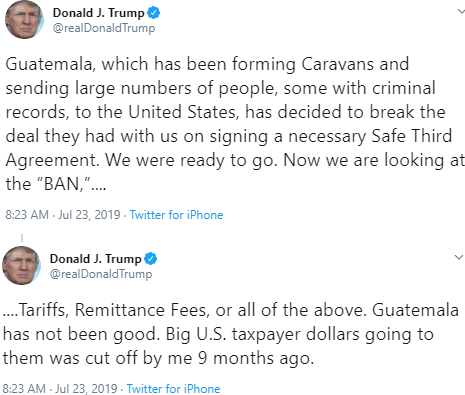 Just a couple of days ago, after a meeting with Secretary of State Pompeo, Mexico’s  Foreign Minister Marcelo Ebrard announced that he had told Pompeo that Mexico would not agree to safe third country status either and that the issue was non-negotiable. This is their position in spite of the fact that, to avoid a threatened tariff, Mexico has agreed to increase its cooperativeness in reducing the migrant traffic to the U.S. border, with another 45 days to go on the agreed-upon timeline.

Thus, again, what seemed like deals have evaporated. President Trump and this country will have to solve this crisis on our own. The countries to our south are not part of the solution; they are part of the problem.

Foreigners coming to U.S., said Alexander Hamilton, will "entertain opinions on government congenial with those under which they have lived..."

GOP for past 20 years: Hispanics are natural Republicans!!! https://t.co/pgswkZW6VI

We MUST STOP our Deadly Diversity Lottery Visa Program. How many more lives must we lose before we change our dangerous immigration system?

Thank you @michellemalkin for never backing down to the open border radicals trying to silence you!