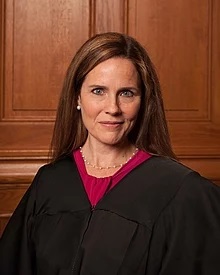 Immigration-concerned organizations on the left and right are weighing in on the appointment of Judge Amy Coney Barrett to the U.S. Supreme Court.

Liberal Vox.com cites Barrett’s “mixed record,” complaining that she has been sometimes an “obstacle to the advancement of immigrant rights,” but not always. “In one case, she actually prevented the Trump administration from ending a policy that allows immigration judges to indefinitely close deportation cases in which the immigrant doesn’t appear to be a priority for enforcement.”

Over on the right, RJ Hauman of the Federation for American Immigration Reform (FAIR) cites the fact that the young Barrett (48) has served only a short time on the appellate court and consequently does not have a long history of decisions. Nevertheless, he says, “her two rulings indicate that she supports the legality of President Trump’s public charge ruling and the independence of consular officers to reject immigration petitions without obtrusive review from activists.”

In summation, Hauman says, “When it comes to immigration, Amy Coney Barrett applies the law as written. That’s really all you can ask.”