Trying to make sense of the crisis on our southern border can be maddening.  For months we’ve been hearing stories about how massive hordes are crossing the border and how migrant shelters are filled to overflowing. Just yesterday, AP published a story entitled “By the numbers: Migration to the US-Mexico border,” which led off with the following chart: 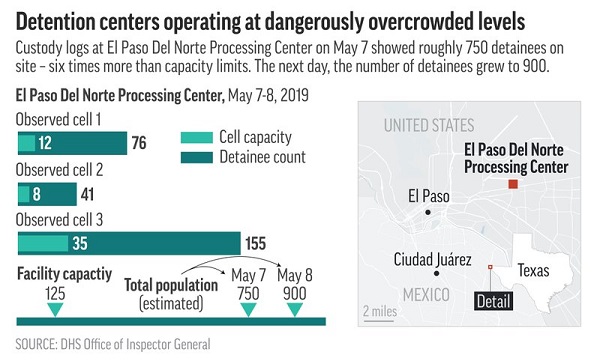 That looks bad. That shelter in El Paso had a capacity of 125 but by May 8 its census had ballooned to 900.  But wait. While the accompanying article was published July 25, note that the data from the chart is at least two-and-a-half months old.

A lot can change in two and a half months.  Or so says today’s article on the AZCentral website, “Once overflowing migrant shelters along southern border closing as releases plummet.”

These shelters exist for migrant families and the more migrant families coming across the border, the more shelter space is needed.  According to AZCentral, the number of such families has dropped “suddenly and sharply in recent weeks,” prompting the actual closing of some shelters and the under-utilization of others.

What accounts for this “sudden and sharp” drop? Analysts attribute the drop in border crossings by families to three factors: (1) seasonal causes related to summer heat, (2) the “remain-in-Mexico” policy implemented by the Trump administration, and (3) Mexico’s stepped-up enforcement of its own immigration laws impeding migrants’ ability to get to our border.

“Historically, Border Patrol apprehensions drop in July when summer heat in the desert soars above 100 degrees,  making it especially dangerous for migrants,” says Adam Isacson, of the Washington Office on Latin America, a think tank. For that reason, the postpone their journeys.

The “remain-in-Mexico” policy started as a trickle in San Diego back in the winter but has steadily been expanded, to the point where 20,000 asylum seekers have been returned to Mexico to await the adjudication of their cases.

Potentially the most important factor in the reduction of illegal border crossers and asylum seekers has been the purported relative success of Mexico’s efforts in its own country.  Reportedly, the Mexican government has deployed 15,000 troops to its northern border and 6,500 national guard troops to its southern border to prevent illegal entry there.  This increased attentiveness on the part of Mexico is a direct result of the tariff President Trump threatened to apply otherwise.  “‘The post-tariff crackdown is having an impact,”‘ Isacson is quoted as saying.

Isacson warns, however, that what we are seeing  may simply be a summertime lull. Once the temperatures moderate again and once the smugglers come up with new ways of delivering migrants, the numbers may well shoot up again.

So, no more crisis? Hardly. The immigration courts still have a backlog of nearly one million, and adjudication can take six years. And the numbers in “By the numbers: Migration to the US-Mexico border” aren’t imaginary if a little dated.

As we said above, trying to keep up with this stuff is maddening. So is trying to decide which report and which “expert” to believe. We keep trying, so stay tuned.

Foreigners coming to U.S., said Alexander Hamilton, will "entertain opinions on government congenial with those under which they have lived..."

GOP for past 20 years: Hispanics are natural Republicans!!! https://t.co/pgswkZW6VI

We MUST STOP our Deadly Diversity Lottery Visa Program. How many more lives must we lose before we change our dangerous immigration system?

Thank you @michellemalkin for never backing down to the open border radicals trying to silence you!