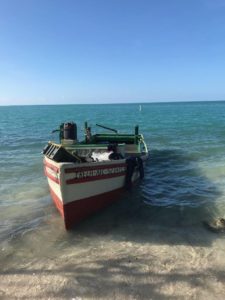 Between nine and twelve migrants, presumably from Cuba, were apprehended by Monroe County sheriff’s deputies near Key Colony Beach on Wednesday morning. Key Colony Beach, an upscale island community in the Middle Keys, is about 50 miles north of Key West.

Adam Linhardt, spokesman for the Monroe Sheriff’s office, said the group arrived in “a makeshift boat around 8:12 a.m.” The boat, pictured here, was found beached on the shore later that morning.

For many years, under the “wet foot/dry foot” policy of the United States, migrants from Cuba were allowed to remain in the U.S. if apprehended on land. Only those interdicted at sea were returned to Cuba. That policy was abolished near the end of the Obama administration, however, and now all illegal immigrants, regardless of country of origin, are treated identically. For that reason, these would-be immigrants will likely be returned to their homeland.

For more, see the Miami Herald.