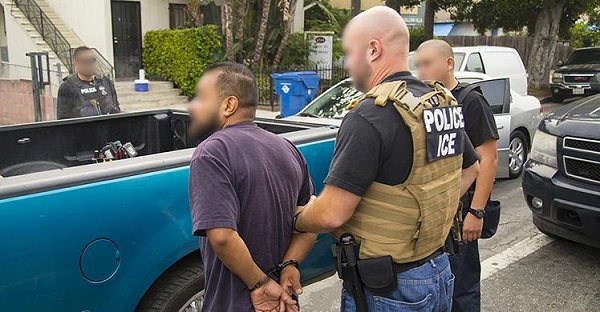 The countries of origin of those arrested were diverse. While 68 were from Mexico and another 21 from the Northern Triangle countries of Guatemala, Honduras, and El Salvador, other countries represented were Czech Republic (1),  Israel (1), Kenya (2), Pakistan (2), Poland (1) and Ukraine (1).

Fifty-eight had criminal convictions, for crimes including assault, battery, domestic violence, child exploitation, sexual assault, driving under the influence (DUI), drug possession, re-entry after deportation, resisting officers, obstruction of justice, hit-and-run and illegally possessing weapons. Fifteen of those arrested were immigration fugitives; 19 others had illegally re-entered the United States after having been previously deported, a felony.

The news bulletin issued by ICE concludes with the following statement which puts on notice the “non-cooperative jurisdictions” referred to above:

A consequence of ICE being forced to make more arrests on the streets is the agency is likely to encounter other unlawfully present foreign nationals that wouldn’t have been encountered had we been allowed to take custody of a criminal target within the confines of a local jail.