We told you back on July 11 about “Fairness for High-Skilled Immigrants Act,” which was passed by the House on July 10 (as H.R.1044).  Mitch McConnell has yet to decide whether to put its companion bill, S.386, to a vote in the Senate.

On the night of July 11, the hosts of the Breitbart News Tonight radio program interviewed Hilarie Gamm about the bill.  Gamm is the co-founder of the American Workers Coalition and the author of Billions Lost: The American Tech Crisis and The Road Map to Change. 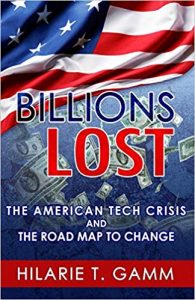 “Because India has been the country of choice for big tech for over 25 years to import cheap foreign labor into the United States to displace Americans — middle-class workers — who are working in all different kinds of jobs, not just technology. So what used to be just tech in H-1B, we now have physical therapists, accountants, auditors, and [and] teachers who are coming in on the H-1B, now.

“There is a flood of H-1Bs from a couple of companies and basically one country, so because of that, there is a 500,000 person backlog just from India. . . . [W]e have five huge companies — Cognizance. . .the number one H-1B purveyor. . . . companies that people associate as American companies like Deloitte, or Accenture, or IBM, and they’re bringing in thousands and thousands of H-1Bs in addition to sending loads of jobs outside the U.S. . . .

“We have millions of Americans who could be working and are not working, and then we have loads of under-employed Americans, and they’re all being cut out of the labor market because of cheap foreign labor. Basically, H.R.1044 seeks to reward those huge companies like the Amazons, and the Google, and the Microsofts that continue to get all the H-1Bs every year.

“Americans need to understand that this is their future. Their children will not have jobs. There will be no point to going to college because there are not going to be any jobs left for Americans. . . . I know that all the big tech moguls want people to believe that it’s artificial intelligence that’s going to be taking people’s jobs. It’s not AI. It’s foreign cheap labor. . . . That’s what’s taking the jobs.

“[W]e’re basically culling out and hollowing out our American middle class. . . .”

We urge you to listen to Gamm’s full, eye-opening  interview here.

20,000 fake IDs, mostly imported from China, have been seized at Chicago's O'Hare airport this year alone. Phony Chinese-produced driver's licenses, purportedly for various U.S. states, are turning up all over in America. The Chinese underworld, scarcely discernible from the Chinese government, is flooding the West with drugs, illegal aliens, and counterfeits of all descriptions. They must be stopped. www.aicfoundation.com/china-flooding-u-s-with-fake-ids/ ... See MoreSee Less