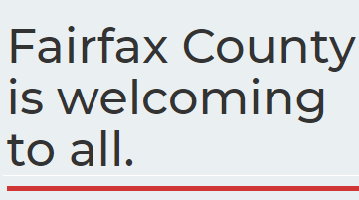 Fairfax County, Virginia, is an affluent suburb of Washington, DC. Its website proclaims that it welcomes “all who wish to live in, work in and enjoy our community, including our immigrant residents and neighbors. We believe in keeping families together and protecting those who are most vulnerable.”

On that same website, the County goes further, proclaiming that while it doesn’t enforce civil federal immigration laws, nevertheless it is not a sanctuary county and it does cooperate “to the fullest extent required by federal, state or local law with any law enforcement agency, including ICE.”

At that point, the County’s veers into some iffy waters, according to the Immigration Reform Law Insitute (IRLI). A recent report by that organization reveals that from May 2018 to May 2020 Fairfax County denied ICE detainer requests for 915 criminal aliens and instead released the criminals back into the community.  Only 14 detainers were honored by the Fairfax Sheriff’s Department during that time.

I don’t know what qualifies you as a sanctuary county if you do not cooperate with federal immigration authorities and turn over criminal aliens. Not only will they not honor ICE detainer requests, but they’ve prohibited ICE officials from county buildings and they’ve encouraged local prosecutors and local officers to release individuals with summonses rather than arresting and booking them so that their fingerprints don’t go into the system which alerts the FBI who alerts DHS.

ICE has authority to issue detainers on its own, yet Fairfax, like many sanctuaries, avoids the responsibility of honoring ICE requests by insisting on seeing a warrant signed by a judge, not that easily obtained. Using this dodge, Los Angeles County, California, has freed more than 25,000 criminal aliens over ICE objections.

John Binder of Breitbart News notes that ICE statistics show that up to 80 percent of freed illegals go on to commit more crimes. While Fairfax County gushes over “protecting those who are most vulnerable,” its practices suggest otherwise. Maybe their website is in need of an update.