When a medical student graduates, he or she must complete a residency before practicing as a licensed physician. Due to the Wuhan virus from China, this year about 6,000 graduates remain “unmatched” with a residency program and therefore cannot work in the field for which they are trained. Yet foreign doctors are continuing to arrive in this country on H-1B and J-1 visas, making the job of finding a residency all the more difficult for the American doctors. 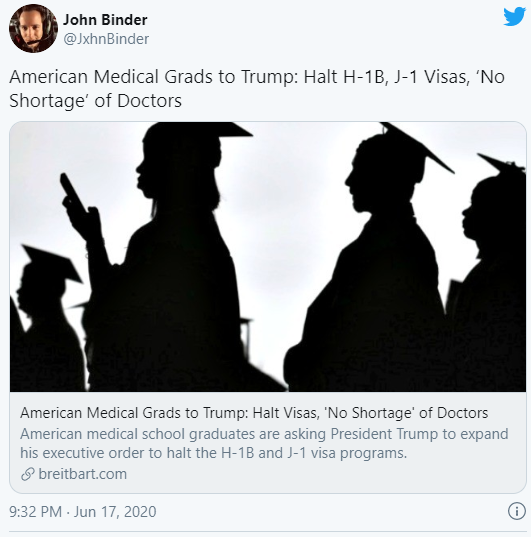 A group representing these unmatched physicians called “Doctors without Jobs” has sent a letter to President Trump and Congress asking them to halt the steady inflow of foreign doctors and give priority placement to Americans. The letter reads, in part:

[T]housands of jobless American doctors urge you to expand the current H-1B and J-1 visa ban to include the healthcare sector. Bringing in more foreign doctors will only exacerbate our already dire situation. Leaving qualified American doctors jobless — especially during this COVID-19 pandemic — while foreign doctors are filling federally funded residency training positions, is not in the best interest of America. Please help us.

On June 22, President Trump issued an executive order extending and broadening the ban on H-1B and J-1 visas, but health care workers were explicitly excluded. The unmatched doctors are saying, according to Breitbart’s John Binder, “there is no need to keep importing foreign doctors to fill coveted hospital residencies and jobs when there is a pool of thousands of U.S. medical graduates who want those jobs.”

Binder concludes by noting that this fact has not sunk in with many members of Congress, Democrat and Republican alike:

Despite there being no shortage of qualified American doctors, Senators David Perdue (R-GA), Dick Durbin (D-IL), Todd Young (R-IN), and Chris Coons (D-DE) — as well as the Democrats’ HEROES Act — have sought to increase the number of foreign doctors and nurses imported every year to take U.S. medical jobs.

Critical race theory is now the official ideology of the U.S. government.
https://www.usatoday.com/story/money/2021/01/20/biden-executive-order-overturns-trump-diversity-training-ban/4236891001/