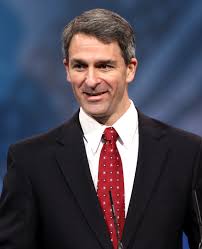 In April, we speculated that President Trump might appoint an “immigration czar” to coordinate policy and operations across the executive departments most involved with immigration:  Homeland Security, State, Defense, Justice, and Health and Human Services. An unnamed White House official confirmed Wednesday the impending appointment of Ken Cuccinelli to the new post.  Cuccinelli had been one of the two prospective appointees, the other being Kansas Secretary of State Kris Kobach.  Both are considered relatively hard line on the issue.

Cuccinelli, a former Virginia attorney general, met with Trump on Monday, and an official announcement may come as early as this week.

This appointment should come as welcome news to immigration skeptics, many of whom have been frustrated with lack of progress by the administration on the border crisis and federal immigration policy in general.  As attorney general for Virginia, Cuccinelli sponsored bills to force employees to speak English in the workplace and attempted to repeal birthright citizenship.  He enjoys wide support among conservatives, not only for his immigration stance but for his positions on social issues, such as homosexuality, which he has said “brings nothing but self-destruction, not only physically but of [homosexuals’] soul.”

Cuccinelli is expected to report to Kevin McAleenan, acting secretary of Homeland Security, but will give regular briefings directly to the President. His relationship with the two principal White House immigration advisers, Stephen Miller and Jared Kushner, has not been established, though on policy he is expected to be much closer to Miller.

While the decision is laudable, it is depressing to note that the free exercise of religion survived by only one vote in a country founded on the principle of religious freedom.