In 2004, the government of Mexico notoriously issued a comic book guide to migrants wishing to sneak into the United States. That colorful publication, “Guide for the Mexican Migrant,” gives helpful hints in a fun, graphics-based format about how to cross the desert without dying of thirst (adding salt to your water will prevent dehydration) and later, once in the U.S., important reminders such as “Don’t call attention to yourself. … Avoid loud parties. … Don’t become involved in fights.” Good advice, all ’round. 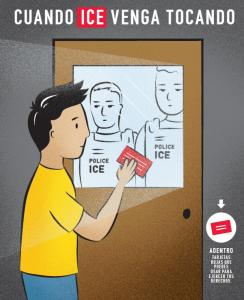 In keeping with the comic motif, a California group has now published a sort of follow-up comic guide, “Cuanda ICE Venda Tocando” (“When ICE Comes Knocking”). Published by a combine of groups including the Council on American-Islamic Relations Sacramento, Sacramento Area Congregations Together, Sacramento Immigration Coalition members, and N & R Publications, “When ICE Comes Knocking” is aimed at today’s migrant, who is a lot cagier than his predecessors of a decade ago. The modern, up-to-the-minute migrant now knows that if he casts himself as an “asylum seeker,” brings along a child or two, and gives himself up just north of the border, he’ll be released into the U.S. for the simple reason that his numbers are overwhelming.  This new comic targets the intrepid migrant who has already assumed a new life in los Estados Unidos. It offers suggestions as to what to do when the ICE man cometh in a  variety of possible scenarios, such as:

In each case, the advice is similar: “don’t run,” “don’t talk,” “ask for a lawyer,” etc. In fact, the advice always boils down to, “Show them your targeta roja (red card).” 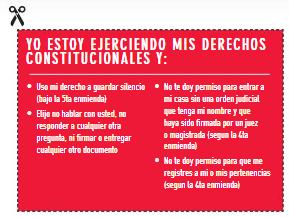 What are red cards? The red card has no official status, of course. It is sort of a document for the undocumented, which can be printed from various sites on the web or even clipped from a comic book.  (The printed version of “When ICE Comes Knocking” conveniently contains a pageful of red cards that can be cut out and used at the appropriate time.) Red cards come in various styles with differing messages, but generally  announce (to the ICE agent, usually), “I am exercising my constitutional rights and…” followed by such things as what the bearer will or will not do, such as keeping quiet, not permitting any searches, demanding legal representation, and so on. Here is some sample verbiage from the “Immigrant Legal Resource Center“: 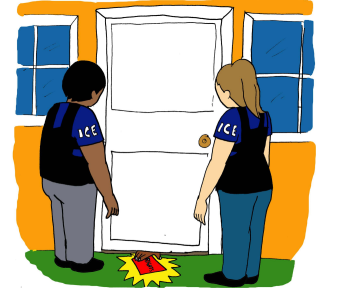 One amusing piece of advice above is: “[S]how the card through the window or slide it under the door.” And, in case that isn’t clear, here’s an artist’s conception.