Word this morning is that, after a week of often vitriolic debate, the Senate has agreed upon a two-trillion-dollar relief bill that could be affirmed today by the House and sent to the President for signing. 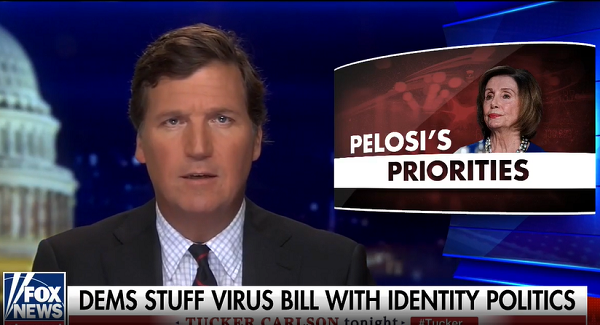 We’re still not sure what will be in the final bill, but in his March 23 monologue on Fox News, Tucker Carlson eviscerated Nancy Pelosi’s version, released on Monday.

Carlson adds that it’s not just Democrats who are anxious to push their own political agenda by leveraging the crisis. He has been told, he says, that “some Senate Republicans are trying to kill the requirement that companies that receive bailout funds stop sending American jobs overseas.”

Who would do that? he asks. Ask the Chamber of Commerce.

For a transcript of Carlson’s monologue, see Fox News.