Olga Sánchez Cordero, Mexico’s Minister of the Interior, warned on Wednesday that a huge, 20,000-strong, migrant caravan might be forming in Honduras.  To counter this threat, she said the Mexican federal government is planning to fortify the Isthmus of Tehuantepec, the narrowest part of Mexico. 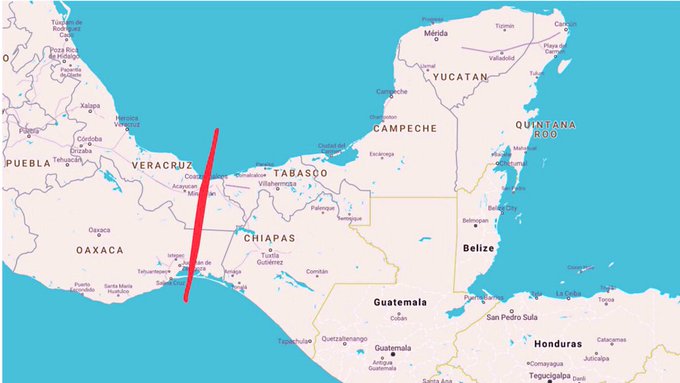 Sánchez made her remarks after a Tuesday meeting with American Homeland Secretary Kirstjen Nielsen in Miami.  The DHS issued a statement saying that Nielsen and Sánchez  “discussed ways the U.S. and Mexico can work together to address irregular migration and the record levels of illegal entries at the U.S. southern border.”

Unwilling to antagonize the U.S. and apparently growing weary itself of the seemingly endless treks of foreigners through their country, the Mexican government has developed plans to set up a “containment belt” across the Tehuantepec isthmus, which is about 124 miles wide at its narrowest point. This string of highway blockades and checkpoints will be manned by federal police and immigration agents, though Sánchez insisted the area would not be militarized.

Additionally, Mexico has decided to discontinue the handing out of “humanitarian visas” to migrants, a recent practice that has apparently only exacerbated the problem.

Migrant support groups such as Pueblo Sin Fronteras have pooh-poohed the idea of so large a caravan, insisting that “there has never been a caravan of the size that Sanchez Cordero mentioned.”  A spokesman for that group blamed Homeland Security Secretary  Nielsen for “creating fear.”

For more, see The Telegraph.