On the night of Saturday, July 27, the U.S. Coast Guard interdicted an overloaded boat carrying 27 Cubans just five miles south of Key West.  The 18-foot boat, described as a “migrant chug,” held 27 Cuban migrants: 22 males, four females and one child. (“Chug” is the slang term for a small, handmade boat built from scrounged materials for use by migrants.) 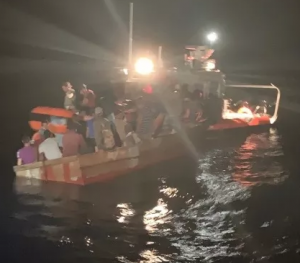 Alerted by the crew of a good Samaritan craft who heard voices but did not see the chug, the Coast Guard dispatched a response boat, which found the boat precariously floating off the coast. All passengers were placed safely on board the cutter Kathleen Moore and will be returned to Cuba.

Approximately 438 Cuban migrants have been caught attempting to illegally enter the U.S. by sea since the current fiscal year began last October. This represents an increase over the total of 384 for the previous fiscal year.