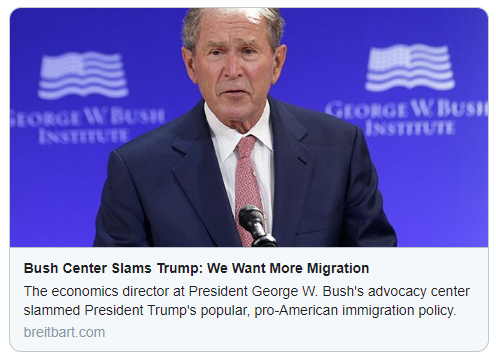 On May 1, the same day the Bush Center began its campaign to prevent President Trump’s temporary immigration restrictions from becoming permanent, the Bloomberg News editorial board published this: “After the Pandemic, the U.S. Will Need More Immigrants.”

The board declared that, after the financial crash caused by the Wuhan virus imported from China, America’s “goals should be to increase immigrant admissions overall, while . . . providing a pathway to citizenship for the 11 million undocumented immigrants already in the country.” The board did throw in the usual sop about “strengthening border security” and it emphasized that skills should trump family ties. (That emphasis differs from that of the squishy Bush Center, which reveres and wholeheartedly welcomes ALL immigrants, regardless of their “skills, education, or country of origin.”)

This campaign, loosely known by its “#AllofUS” hashtag, is part of a broader campaign you could call “Big Business as Usual.” That campaign is sponsored by a combine of Fortune 500 companies and numerous immigration-friendly groups, many of them financed by the Koch brothers and George Soros.

On April 17, a few days before President Trump announced his pause in immigration, the Big-BaU pro-immigration coalition sent a letter to top government officials titled “Relief for Immigrants Sign On Letter to DHS and DOS.”

The letter urged the Department of Homeland Security and State Department to protect the access of America’s business community to guest workers of all visa categories (H-1B, J-1, EB-3, H-2A, etc) by essentially throwing out existing rules governing the guest worker system and replacing them with “flexibility.” It was signed by big business outfits such as TechNet and the Information Technology Industry Council, whose members include labor brokers specializing in out-sourcing U.S. jobs to India. Other signers included AmericanHort, the Essential Worker Immigration Coalition, the American Immigration Council, the American Immigration Lawyers Association, Americans for Prosperity, the Libre Initiative, the National Association of Evangelicals, the National Immigration Forum, the Hispanic Leadership Fund, and Bloomberg’s advocacy group, New American Economy.

Back in January, when Mike Bloomberg was still pouring millions into a short-lived and spectacularly unsuccessful presidential campaign, he told the San Diego Union Tribune:

Clearly, Mr. Bloomberg believes that no American worker is ever going to be the best candidate for anything. The best, in his worldview, will always comes from abroad. Americans will just have to stand by and wait for any leavings.