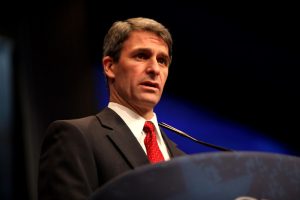 Ken Cuccinelli, Acting Director of U.S. Citizenship and Immigration Services, sat down on September 30 with Mark Krikorian of the Center for Immigration Studies (CIS), to discuss immigration policies within the Trump administration.

Addressing the decline this summer in the number of illegals apprehended at our southern border, Cuccinelli noted that the typical seasonal decline–owing largely to weather–tends to be around 6 percent. This year, however, the drop has been 56 percent. Among families with small children, the decline is closer to two-thirds, which makes housing and maintenance of those families much more manageable. Nevertheless, he cautions, the number of illegals apprehended in August–64,000–is still at record levels, higher than any but two months in the previous seven years, excepting the sky-high months of 2019.

Illegals claiming refugee status, he explains, have to pass an initial test of “credible fear.” Historically, passing rates of this test were nearly 100 percent–rates never justified by the always-low rates of refugee status actually granted. “Credible fear” passing rates are now down to about 80 percent, better but still far in excess of the numbers that will finally be approved. Cucccinelli says the strategy of large numbers of bogus refugee claims is an attempt to “swamp the system.” He says that that strategy is to “swamp the border and to swamp the Border Patrol, and ICE, and our resources at the border.” Once the system is overwhelmed, illegals are counting on a reversion to a “catch and release” policy.

This will not happen, he says; catch and release will not be resumed. New policies such as “Remain in Mexico” and ICE’s ability to keep detained families together will make it unnecessary.

Throughout the rest of a far-ranging, hour-long interview, Cuccinelli discusses immigration fraud, the H-1B visa system for tech workers, the H-2A system for agricultural workers, and the S.286, a bill currently before the U.S. Senate that would eliminate the 7 percent cap per country on the issuance of employment green cards. You can listen to the Facebook live stream or read the transcript. For more, see the CIS website.

Another pending betrayal of citizens and taxpayers by their own government.
https://t.co/v3EE5sZr8W

What would happen if a GOP candidate said he was committed to putting a blonde woman on the Supreme Court?

Biden’s senior advisor Symone Sanders on Sunday said Biden is “committed to putting a black woman on the Supreme Court” should he get elected. https://t.co/DdpmRHk2cI