Bryan Kolfage of We Build the Wall, Inc., in a series of tweets has posted disturbing video footage of illegal aliens, led by armed cartel members, crossing the U.S. border this weekend at Sunland Park, New Mexico.

According to Kolfage, We Build the Wall cameras captured videos of nearly 1000 migrants coming across the border at Sunland Park over the weekend.

In a departure from what we’re usually told–that border crossers are willingly giving themselves up to Border Patrol agents–these illegals “didn’t want to be caught,” according to Kolfage. His videos show them actively fleeing from agents at a full run.

A still tweeted by Kolfage shows an International Border and Water Commission gate, part of a fence jointly owned by the U.S. and Mexico, that had deliberately been left open. 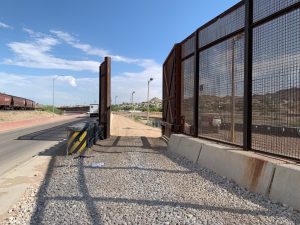 In case we need any reminders, the work of grass roots organizations such as We Build the Wall reminds us that we are not getting the full story from established media outlets.

You can visit the We Build the Wall website at https://webuildthewall.us/.  You can find Bryan Kolfage on Twitter at @BrianKolfage.

Good luck Marine, UK behind you.

.@ICEgov: “If you’re going to have a sanctuary city policy & you know it's going to result in people going back out to the street & committing more crimes, at least own it...don't sit there & try to push the blame onto someone else - it’s disgusting.” https://t.co/4nRBOrXjCJ